NICARAGUA – From León to the Pacific coasts : qué calor!

We leave the refreshing mountains for the hot Nicaraguan cities. We heard only good things about León and we are happy to discover this colonial town! We did not really visit the city centers in Honduras, so we will enjoy the urban side of Nicaragua!

And so we drive a few hours, with what feels like brand new back wheels and quiet brakes (you can have a look at our last mechanical episode over here), heading to León.

León: a revolutionary spirit and a religious soul

While the altitude decrease, the temperature increase. León is situated just 20 kilometers away from the Pacific coast and it is one of the cities with the most interesting history in Nicaragua, because it was the old capital city.

Surrounded by volcanoes, in a very seismic area, the actual city was built 30 kilometers away from León Viejo, which was hit by several eruptions and seisms. Following different events which partially destroyed León Viejo, it was decided to move the city to the actual place of León… away from volcanoes.

When we arrived the city looks tumultuous, and not only because of the temperature (yes, because it is really really hot there): Léon is a student city, and the center of the Sandinista movement in the 60’s.

Léon is one of the most famous revolutionary city of the country, the one where the Sandinista revolution still can be seen on walls.

You said Sandinista? Yes, this is a armed revolutionist movement opposed to the Somoza dictatorship, which was supported by the USA (because they put it in place). The FSLN (Sandinista National Liberation Front) started a campaign in the 60’s that quickly received the support of the people. The revolution finally evolved into a bloody war in the streets and led to the overthrow of the government in 1979. The FSLN kept the power until 1990, working at the restoration of the economy, despite of the embargo imposed by the USA.

In Léon, university city, the students took an important part in this revolution and in the dictatorship opposition. All this story is written on the city walls.

Our walk passes through a lot of churches. We do not go in each of one, but just the entrance are amazing!

Between mural paintings and churches, we spend a lovely afternoon discovering the city center. Then we visit the Asunción cathedral, built between 1747 and 1814 in baroque style, the biggest of Central America. We discover a very bright white roof (no shoes but sunglasses are required).

The day is starting to fall, we may have to go to our night spot. We decided that the day after we will discover the Cerro Negro and sleep just in front of the park entrance.

The Cerro Negro is one of the youngest volcano in Central America and is situated in the Pilas el Hoyo natural reserve. We arrive at night, with the storm, so we can try to take pictures of the lighting…

The day after, at 8AM we rent sledges to the park guides and drive to parking lot near the volcano where the hike starts. It is pretty easy and can be done in 1 hour or 1.5 hour. At the summit, the view is pretty impressive!

For the descent, we dress up our best clothes and hop: we go on our sledges and we jump! The descent just takes around… 3 minutes!

After a good shower, we go back in the truck to go to the Ocean. We heard about a little heaven owned by Frenches people, where the life and the food are good! This last argument convinces us, we take the road to the north coast of Nicaragua and we set up for a few days in El Cielo, leaving our cameras alone (so no pictures of this place…).

After some days of sedentariness, we take the road back to Managua, but we decide to make another break in a small village by the sea for 2 more nights. It is hot, we alternate between the hammock in the wind and some small walks in the quiet streets of the village.

After all this intense activities, we decide to go back inside the land, and go forward south. Direction Apoyo laguna. On our way, we can’t miss Masaya. This volcano is one of the most active in the area and it is possible to drive to the crater, during the day or the night, and to take some pictures at the top. When we arrive, it is 2PM… Then we asked ourself: what do we do? Do we wait until the night? Yes, but what can we do during this time? Or, we go now et we will come back at night to do the night visit too?

Well, we decide to enter now et probably not go back later…

After the small visitor center explaining the history of the volcano, its activity et the life of the people around, we drive to the crater. But, depending of the volcano activity, the access can be closed. And if it is open, you are allowed to stay only 10 to 15 minutes at the top.

All accesses and trails aside from the parking lot are closed when we arrive, so we just stay near the crater, smelling perfumes coming from the belly of the Earth!

We go back on road to Laguna de Apoyo and we set up in the parking lot of a hostel, in the shade and near the lake.

The Apoyo laguna is a very pleasant place: in the middle of a natural reserve, the laguna is a lake inside a sleeping volcano crater.

We enjoy some Internet, bathing and a good restaurant during few days…

NICARAGUA – From León to the Pacific coasts : qué calor! was last modified: July 30th, 2018 by Dana 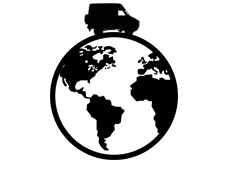